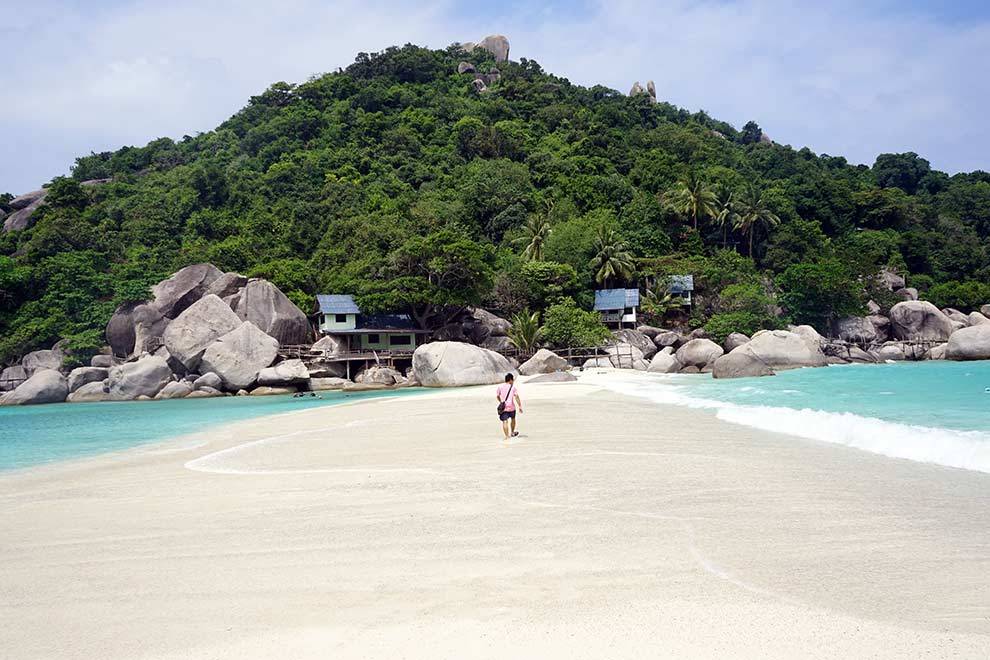 15 days trip to Thailand: a great route for first-timers

Today I’m going to tell you about one of the best 15 days trip to Thailand you can do, very popular since it visits most of the country’s highlights.

This route that I designed a few years ago, passes through authentic paradises and places full of endearing cultural treasures, ranging from Bangkok to Thailand’s far north.

On this route we suggest you fly from Bangkok to Chiang Rai, an option that will save you many hours on the road… But there is a toll that you’ll have to pay: you’ll miss Sukhothai. To make up for it, one of the highlights of this route is the ruins of Ayutthaya, the ancient capital of Thailand, which are in fact quite similar to the ruins of Sukhothai.

→ Do you want to get some inspiration about which destinations to choose on your first trip? See our article 45 Drone Photos of Thailand.

Type of trip: On your own by public transport, or by agency

If you’re wondering what to see in Thailand in 15 days, this is a great itinerary:

In the following map you can see the first part of the trip, without the beach part:

▷ Are you looking for a longer itinerary? Have a look at this 25 days to Undiscovered Thailand.

Details about the 15 days trip to Thailand

The first step of the journey, of course, will be to get to Thailand. Have you already booked your flight?

What do I need to know before booking my flight to Thailand?

Finding a flight to Thailand is easy. Nowadays, there are maney airlines that connect Bangkok with the rest of the world, and using one of the many online flight search engines is not that hard to find good deals. We refer to portals such as eDreams or Skyscanner, where you will see many connecting flight options from your nearest airport to Bangkok.

Which airport should you fly to to travel to Thailand?

The most common option, although not the only one, is landing in Bangkok, the capital of Thailand. Bangkok has two airports:

You can land at either of these two airports, as they are the same distance from the city center, but it is far more common to land at Suvarnabhumi Airport (BKK), as it is the newest and has many more international connections.

If you fly from a European country, you can take a direct flight from many European airports, such as Paris, Zurich, Frankfurt, Amsterdam or Helsinki, or make a stopover in them. Or you can make a stopover in the Middle East, Dubai, Abu Dhabi or Doha. The trip is usually between 12 and 20 hours, depending on the point of departure and the length of the stopover.

On the outbound flight from Europe you miss a day, so if you leave on January 10, you will arrive on the 11th.

🗨️ My opinion on the flight to Thailand

I have traveled the Barcelona-Bangkok route many times, stopping over at many different airports, and personally I prefer to fly at night. If, like me, you are one of those who has no problem falling asleep in a small seat on a long flight, I recommend taking a night flight, and, in case your itinerary has a layover, at least for the longest flight.

If you fly from Europe and don’t want to spend so many uninterrupted hours on a plane, you can check the option of flying via Doha (Qatar Airways), Dubai (Emirates) or Abu Dhabi (Etihad Airways) as it will split the flight time into two sections of similar duration (about 5-7 hours each, depending on your airports of origin and stopover).

What do I need to know upon arrival?

Well in advance before your travel, you must check Thai immigration requirements based on your passport nationality.

Once you land, you will need to go through the immigration process, collect your luggage, and then you can exchange EUR/USD/GBP to THB at the airport before taking a taxi, bus or sky train to your hotel.

If you decide to travel with us, we will be waiting for you at the Arrivals Hall holding a little welcome board with your name.

There are endless options of what to see in Thailand in 15 days. Bangkok will be your first stop. The capital of Thailand is a fascinating megalopolis, where tradition and modernity go hand in hand.

You can’t miss visiting its main temples, strolling through its vibrant street markets and enjoying the famous Bangkok nightlife. Spend at least a couple of days in the city!

After more than 10 years living in Bangkok, I think the most important things to see if visiting for the first time are:

► The temples of Bangkok.

→ You can start discovering everything the city has to offer in our section on Bangkok.

The itinerary for this fourth day will be as follows:

Ayutthaya is one of the ancient capitals of the kingdom of Siam, where the remains of its original temples are preserved, some ruins in a better state of conservation than others, but always spectacular. Ayutthaya is a UNESCO World Heritage Site, a truly fascinating and very photogenic place. Every time I go to Ayutthaya I can’t help but take hundreds of photos.

🚌 How to go to Ayutthaya from Bangkok?

You can visit Ayutthaya on your own from Bangkok by bus or train, and after visiting the city, you can take another bus or taxi to Bangkok’s DMK airport to fly to Chiang Rai.

You will find much more info in our Ayutthaya section. You can also visit Ayutthaya by joining our regular day trips at InThailand Travel, we do one almost every day.

🧳 When visiting Ayutthaya, should I bring my suitcase/backpack?

Ideally, we suggest you to visit Ayutthaya with your suitcase/backpack, and then go directly to Bangkok’s Don Mueang Airport (DMK) to fly to Chiang rai. This airport is located between Bangkok and Ayutthaya, so you will not have to re-enter the capital of Thailand, avoiding its nightmarish traffic jams.

This is how we organize it for our travelers. But if you visit Ayutthaya on your own as a day trip, of course, you will not want to carry your full luggage while visiting the city temples, so it is better to leave it at your hotel in Bangkok. You can either fly to Chiang Rai the next day, or book a flight on the same day that departs as late as possible.

On your 15 days route in Thailand, a visit to Chiang Rai province should not be missed. The itinerary that we suggest is the following:

Located in the far north of Thailand, Chiang Rai is home to the famous White Temple, and gives access to the Golden Triangle region.

Chiang Rai is also a good area in which to trek through the jungle and among rice fields, and to get to know some ethnic minority villages.

The Golden Triangle is the area where Thailand, Myanmar and Laos meet, with the Mekong River as a natural border. You can take a boat trip on the Mekong river, visit the Mae Sai market, visit one of the opium museums, and visit some of the local tea plantations.

Visiting of the Golden Triangle and other attractions in Chiang Rai province can be done on your own by renting a car or motorcycle, or by joining an agency tour.

The route on this sixth day will be:

🚌 How to go to Chiang Mai from Chiang Rai?

Transfer from Chiang Rai to Chiang Mai can be easily done by bus. The Green Bus company is the best option if you travel on your own, and you can book the ticket on their website.

If you make the journey from Chiang Rai to Chiang Mai in the afternoon, you will have the whole morning to visit the famous White Temple, if you haven’t already. The White Temple is only 15 km south of Chiang Rai, and you can get there by renting a motorcycle or by tuk-tuk. Its innovative and quite surreal style has made it one of the most famous temples in all of Thailand in just a few years.

Chiang Mai, the capital of the ancient Lanna kingdom, has a beautiful old town surrounded by a moat and some of its old (rebuilt) walls. There are many temples and alleys that invite to spend the day wandering around. At night, it is always a good idea to visit the busy Night Market area, and if you are there on a Sunday, you should not miss the Night Market that is set up along the main street in the historic center, one of the most beautiful night markets in Southeast Asia.

Chiang Mai is my favorite city in Thailand. If you go for the first time, you should definitely spend some time visiting the main temples. Three of the ones you shouldn’t miss are:

In addition to being a truly beautiful city, the quiet capital of Northern Thailand is an excellent base camp for excursions, such as visiting Doi Inthanon National Park or going on a hike. When planning what to see in Thailand in 15 days, we recommend spending at least a couple of days to Chiang Mai.

→ You may be interested in knowing the best things to do in Chiang Mai.

From Chiang Mai you have direct flights to Phuket, Krabi and Koh Samui, among other beach destinations. That is why we recommend going first to Chiang Rai (which has no air connections to the South), and then to Chiang Mai.

Which beach destination to choose will depend on your preferences. If you are worried about the weather, this article on the climate of Thailand will help you choose.

There are plenty of good beach and island options in Thailand, so it can be difficult to decide on one of them. When making the choice, it is a good idea to take the weather into account, depending on the season when you are traveling in.

Two of the most recommended options are Krabi and Phuket, both in the same region of the Andaman Sea, which have the advantage of offering a very good tourist infrastructure. And, at the same time, are an excellent base camp from which to explore the beaches and islands of the region, including some of the most spectacular in all of Thailand, such as the Phi Phi islands and Railay Bay. From Chiang Mai you have direct flights to both Phuket and Krabi with different airlines, including the low-cost Air Asia.

Another good option is to fly to Koh Samui and visit one of the main islands in the Gulf of Thailand: Koh Samui, Koh Phangan and Koh Tao, all three very different from each other but highly recommended.

Personally, I am a huge fan of Krabi, a destination that I have been to many times, since it offers the possibility of visiting many islands with spectacular beaches.

By now it will be time to say goodbye to Thailand, satisfied after having visited a good selection of the most recommended places for a first trip to Thailand. And almost certainly eager to return as soon as possible to continue discovering new corners of this country that you’re very likely to fall in love with.

You can also do this route through the north of Thailand in 10 days, and then skip the beach. But, without a doubt, with 15 days you can get the most out of the country. And even better if you can afford to add some extra days! At InThailand Travel we offer a version of this 15-day trip to Thailand, although our routes are 100% customizable. 🇹🇭