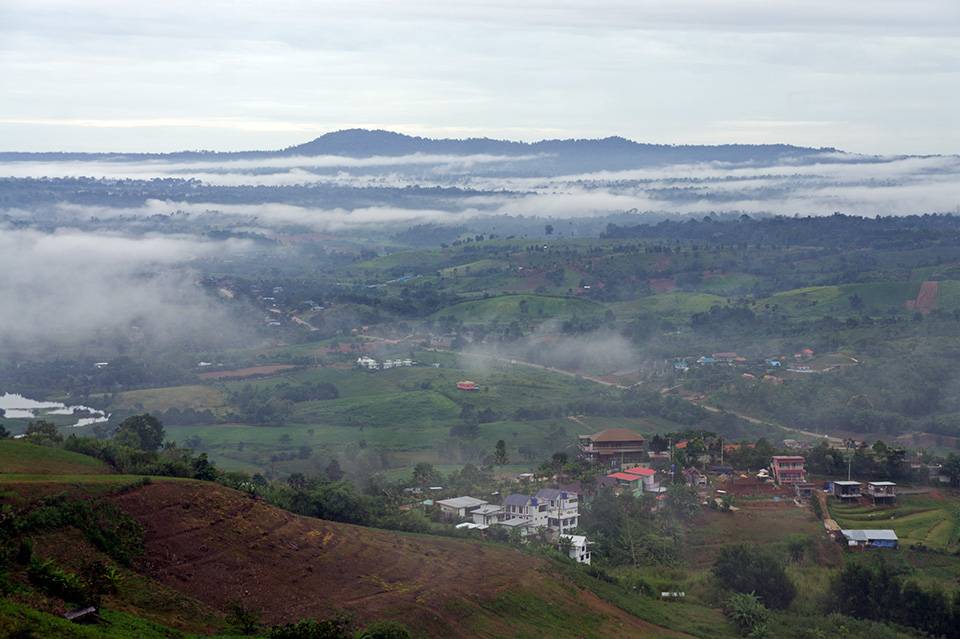 Khao Kho National Park and its surroundings were a discovery that we made recently almost by chance. We wanted to find a place in Thailand where we hadn’t been yet, and where we could drive from Bangkok for just a couple of nights. I knew there were several places that were very popular with Thais as rainy season (May to October) weekend getaways to see ‘sea of fog’ landscapes, what Thais call Talee Mok. Khao Kho turned out to be one of them.

The sea of fog is the typical landscape that can be see in the early morning from a fairly high peak, when a layer of fog spreads just below and covers the entire landscape to the horizon.

The Thai Alps, or the closest thing to them

What we enjoyed the most was actually not talee mok, but the perfect cool temperature and magnificent natural surroundings of the area, which turned out to be ideal to disconnect from the sweaty chaos of Bangkok. As you know, Bangkok is very humid for most of the year, so it is always appreciated to escape for a few days from that huge oven. In fact, Thais call this national park the Alps of Thailand. They believe that the landscape, vegetation and temperatures in Khao Kho are the closest thing to the European mountains that can be found in Thailand. And the truth is that in Khao Kho you can see a lot of alpine vegetation, and the temperatures throughout the year are quite low -only if you compare to the rest of Thailand, of course-. During our stay at the beginning of September temperatures ranged between 20 and 27ºC. For those of us who live in Thailand, this already feels pretty cool.

During the Thai winter (December and January) temperatures tend to drop below 10ºC, and many Thais take the opportunity to visit these mountains and experience a little cold. Aside from indoor air conditioning, cool temperatures are almost exotic for many Thais, who enjoy wearing woolly hats, gloves and all kinds of winter clothes that are practically only worn by those who can afford to travel abroad.

What to see and do in Khao Kho National Park?

We were pleasantly surprised by Wat Pha Sorn Kaew temple. We did not expect to find such a modern and groundbreaking temple in Khao Kho. Adorned with thousands of Gaudí-style ceramic mosaics, this temple is as extravagant as Wat Rong Khun, Chiang Rai‘s White Temple, but is far less famous.

It sits high on a hill, and offers spectacular views of the surrounding mountains. Construction began in 2005 and, despite not being finished, it can be visited almost in its entirety. Admission is free.

2) Chill out on the Sri Dit waterfall

Sri Dit is a small waterfall formed by a curiously vertical rock wall. The drop is not high, but the water flow is usually abundant. It may not be among the most impressive waterfalls you’ve ever seen, but it is a nice and peaceful place to chill out for a while, listening to the water in a natural setting. For many years the surrounding area was a haven for the persecuted Thai Communist Party.

3) A quick stop at the Phra Borommasaririkkathat chedi

A huge pagoda which top spire you can see from quite a distance. It makes a quick stop, to walk around the huge building. Nearby there are also several souvenir shops.

4) Have a look at the Local market

Next to the police station there is a typical Thai country market selling food, clothing and basic household utensils. This market with a strong local atmosphere, which reminded me of those in the small villages of Sapa, in northern Vietnam. In this market it is also common to see members of the Mon ethnic group, dressing in their typical colored costumes. In one of the stalls they sold grilled forest rats… Are you up for it?

Where to stay in Khao Kho to see the sea of fog?

In the Khao Kho area you will find a lot of resorts with mountain views, perfect base camps to enjoy the sea of fog (Thalee Mok) in the early morning. If you go during the week you will possibly be alone, with no other tourists. If you go on the weekend you will probably meet a lot of Thai tourists, mainly from Bangkok.

On the first night we stayed in a place called Khao Kho Palace, a guest house that we later found out belongs to the Thai army. Rooms cost about 400 THB.

The second night we stayed in a little hotel called Mhork Buri Resort, which has a small garden and beautiful views over the lake and the surrounding mountainous area. Very nice. After some haggling, we ended up paying 1500 THB for the triple room.

If you have a really good budget, another cool resort to stay is A moment of love, which is a glamping resort. Luxury tents with great view of the valley and right behind Wat Pha Sorn Kaew.

About 50 kms from Wat Pha Sorn Kaew temple, an hour’s drive away by car, we find the beautiful Phu Thap Boek mountain, with a height of only 1768-meter although it looks much higher. The climb up the mountain is very steep, and once at the top of Phu Thap Boek one has the feeling of actually being on a fairly high mountain.

To reach the top of the mountain you must go up a curvy road, and as you get higher and higher you can feel the temperature drop drastically. Fog often covers the top, something Thais love.

The inhabitants of the mountain are of the Hmong ethnic group. They are the only people authorized by the Thai government to build on the top of the mountain, so all accommodations are managed by them. We were told that only some of the hotels have authorization while others don’t, but so far the government is turning a blind eye. Development has been done in a chaotic manner, and on weekends it is packed with Thais, so if possible you better visit during the week.

Despite the chaotic development at the mountain top, it is worth the climb to enjoy the beautiful sea of fog views from the top. If you have time enough, it is worth spending a night at the top, enjoying the cool weather and eating Muu Khata, the Thai-style BBQ. You can stay in one of the small hostels or in tents.

At the top there is also a National Park and a Buddhist temple with a huge pagoda.

How to go to Khao Kho?

I think the only way to visit Khao Kho is by private vehicle, either car or motorcycle. It is essential to be able to move around the area. You can rent it in Bangkok (with or without a driver) and go up to Khao Kho. Khao Kho is 390 kms north of the capital, and the drive will take about 5 hours. If you feel like it, on the way you can take a detour and stop at Lopburi to see the famous Phra Prang Sam Yod ‘monkey temple’, or you can stop in Saraburi to see the sunflower fields.

If you want to go by bus, you can take one from Bangkok’s Mo Chit station to Petchabun. There are several departures every hour throughout the day, and the trip takes about 4 hours. From there I don’t really know what is the best way to do the remaining 60 kms north, other than renting a car or motorcycle, but there must be certainly some reasonably easy way to do it.