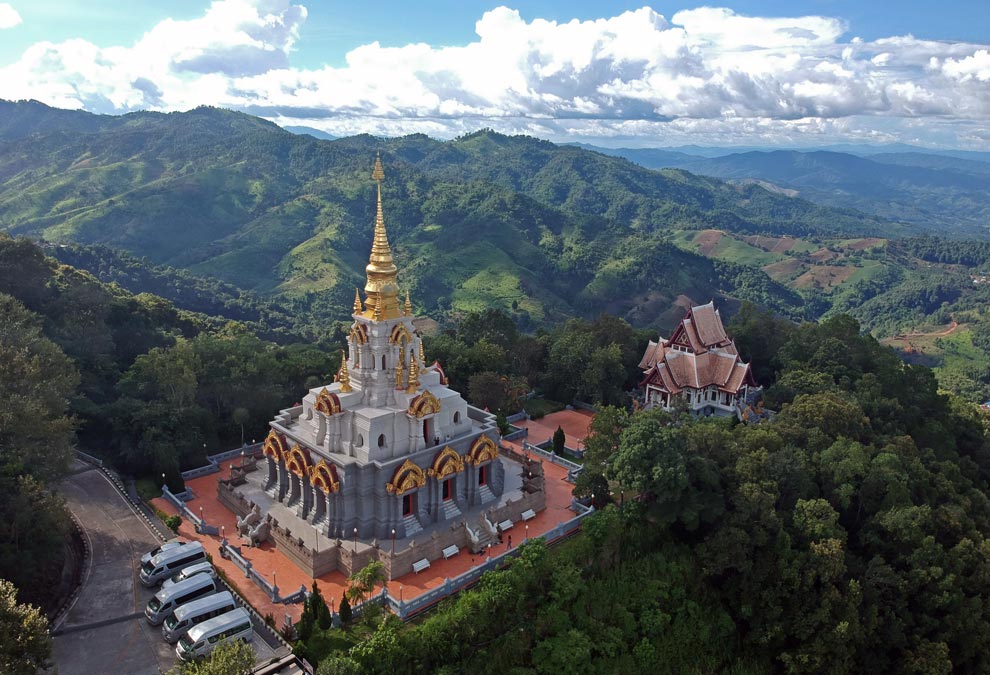 Mae Salong, a little piece of China in the far north of Thailand

Mae Salong, also known as Santikhiri -its modern name, which has never replaced the former- is located in the mountainous north of Thailand, about 70 km northwest of Chiang Rai.

Mae Salong is a unique enclave in Thailand, since despite being Thai territory and less than 10 km from the Burmese border, it seems like a ripped piece of Yunnan that has been dropped here.

The explanation is quite simple: in the early 1960s many ex-soldiers of the Kuomintang -Chinese Nationalist Party-, who had to flee China after Mao Zedong’s communist victory in 1949, settled in Mae Salong after spending a decade sheltering in neighboring Myanmar.

Even today, most of Mae Salong inhabitants speak a dialect from Yunnan, many signs are written in Chinese, restaurant TVs are tuned into Chinese channels, and Yunnan-style noodle soup is easier to find than phad thai.

And while its peculiar history and strong Chinese character are reason enough to visit, Mae Salong offers much more than this. Its elevated location on a steep mountain ridge (Doi Mae Salong) offers excellent views over the surrounding green valleys and mountains. In addition, in its surroundings there are plenty of tea plantations and many minority ethnic groups villages, mainly Akha, Lisu, Shan, Lahu and Mien, which can be visited on self-guided tours.

Far from being among the most popular destinations for travelers to Thailand, Mae Salong has long ceased to be a remote place, and its unique character, coupled with relatively easy access from Chiang Rai, make it a relatively popular destination among travelers who have already visited Thailand on several occasions. In addition, visiting Mae Salong will allow you to change Thai food for the equally delicious Yunnan specialties for a few days.

What to see in Mae Salong?

Local markets are always a great place to take the pulse of a new town, and Mae Salong is no exception. There is a small morning market, opening every day approximately from 6:00 to 8:00, which is attended by locals and inhabitants of neighboring villages (mostly from hill tribes) to stock up on fresh produce. It is located less than 100 meters north of Shin Sane Guest House. Although perhaps not as interesting, at the southern end of the town there is another market, open throughout the day and worth visiting. One side of the street is aimed at locals, with simple mats on the floor selling fresh products, and the other side is oriented to tourists, mainly selling hill tribes crafts.

Also known as Prathat Mae Salong, it is the main monastery of Mae Salong, of the Mahayana Buddhist trend. Beyond its Chinese-style architecture, it is especially recommended for its excellent views, thanks to its location on the top of a wooded hill that rises next to the town’s center. Although it can also be reached by a winding road, the most popular option among travelers is to climb the 718-step staircase that starts behind the morning marking. The prayer building is located at the foot of the hill, while at the top there is a 30-meter-high chedi (Buddhist monument) that can be seen from everywhere in Mae Salong.

Highly recommended to delve into the history of the Kuomintang, and thus learn about the history of this border region and the culture of the local ethnic groups that inhabit here. Admission is free, opening hours 8:00 to 18:00.

>Mae Salong is the main tea cultivation center in all of Thailand, so during your stay you should not miss one of the many tea plantations on the slopes and valleys that surround the town, and especially try some infusion of local tea, mostly of the oolong and jasmine varieties. You can do either in one of the many tea shops in the town itself, where they will give you a free glass of tea in the hope that you will buy them a packet, or directly in one of the plantations, which always have a reserved space for sampling their tea. A good option is 101 Tea Plantation. The cultivation of tea in this area was promoted by the Thai government in the 80s as a replacement for opium crops.

► Trekking: Around Mae Salong there are many villages of minority ethnic groups, mainly Akha and Lahu, but also Lisu, Shan and Mien. We did not find any local agency offering trekkings, but some guest houses such as Shin Sane and Little Home offer their guests free maps of the region showing some trekking routes that it is possible to do on your own. Of course, visitors should moderate expectations and bear in mind that during the last decades this area has ceased to be remote. Today all these ethnic villages have electricity and road access, and most of the territory is no longer covered by thick jungle but orchards and plantations.

► Ban Thoet Thai: also known as Hin Taek, it is a town located about 20 km north of Mae Salong, famous for having been for some years (between the late 70s and early 80s) the center of operations of Khun Sa, the man who for two decades controlled the world opium trade from the Golden Triangle region. His former headquarters are today an interesting but poorly preserved museum dedicated to his figure and the Shan culture. Apart from this, the town is interesting for its mixture of mountain cultures: in addition to inhabitants of the Shan ethnic group (northeast of Myanmar) and Yunnanese, other ethnic groups that live in Ban Thoet Thai are Akha (it is said that this was the first Akha settlement in Thailand), Hmong, Lahu, Liso and Thai Lü, among others.

How to get there

► From Chiang Rai: first take a bus or songthaew bound for Mae Sai (Myanmar border), and get off at Mae Chan/Ban Pasang. There are departures every 20 minutes from 6:00 to 20:00. The 32 km journey takes half an hour and costs 25 THB. Once in Mae Chan/Ban Pasang take a green songthaew to Mae Salong. These songthaews leave when they are full, between 6:00 and 16:00, and there are usually only half a dozen departures a day. It takes about an hour for just 36 km, and costs 60 THB.

► From Chiang Mai: first you have to take a bus to Tha Ton (180 km), and from there a yellow songthaew to Mae Salong (46 km), which have 4 daily departures, every two hours during the morning. The journey takes one hour and costs THB 60.

🚍 Book NOW your bus to Mae Salong with Baolau

How to get around Mae Salong

To get around the town it is best to walk, since it is a small town and going from one end to the other can’t take much more than 15 minutes.

Beyond the regular songthaews, public transport is very scarce, and to go any further there are basically two options: hire the services of one of the motorcycle taxis that wait next to the 7Eleven, or rent a motorcycle in one of the guest houses that offer rental service, for about 200 or 250 THB/day. Mae Salong is in a mountainous area and many of the roads are in poor condition, so motorcycle rental is only advisable for experienced motorcyclists.

You can go to Mae Salong all year round. From December to February the lowest temperatures drop to 12ºC or less, so at that time it is necessary to wear warm clothes. Winter is precisely the high season, when it does not rain, the sky is usually clear and weather is not hot. That’s when accommodation is more expensive. On the other hand, the warmer period is from March to May, although being an elevated and mountainous area the heat is very moderate, and rarely rises above 30ºC degrees. The rainy season is from May to September, and July and August are the most rainy months, although rain tends to fall in late afternoon or at night, so it is not usually a big problem. Although if it happens during a trek it can be quite annoying and leave a muddy ground.

In Mae Salong there is more accommodation supply than demand, with a variety of options from simple guest houses to mid-range resorts, which are the most luxurious options. Among the cheaper options is Shin Sane Guest House, the oldest guest house in Mae Salong (opened in 1970!), with double rooms for 200 THB/night. The most luxurious option (2 km from town) is Mae Salong Flower Hills Resort, in a beautiful green area with good views of the mountains and very complete facilities, with restaurant and swimming pool. They have a main building with rooms (1000 THB/night), and the best and most expensive option: bungalows with good mountain views (2,000 THB/night). In an intermediate range between the two above, other good options are the centrally located Mae Salong Little Home, which offers nice bungalows for 500-800 THB/night, and Osmanthus Hotel, with rooms for 1000-1500 THB and some really spectacular views, probably the best you can have from any Mae Salong hotel.

📣 Do you want to explore the North of Thailand?
👉 Have a look at the the Mae Hong Son Loop.

Nature and OutdoorsTravelling in Thailand

The 25 Best Beaches in Thailand