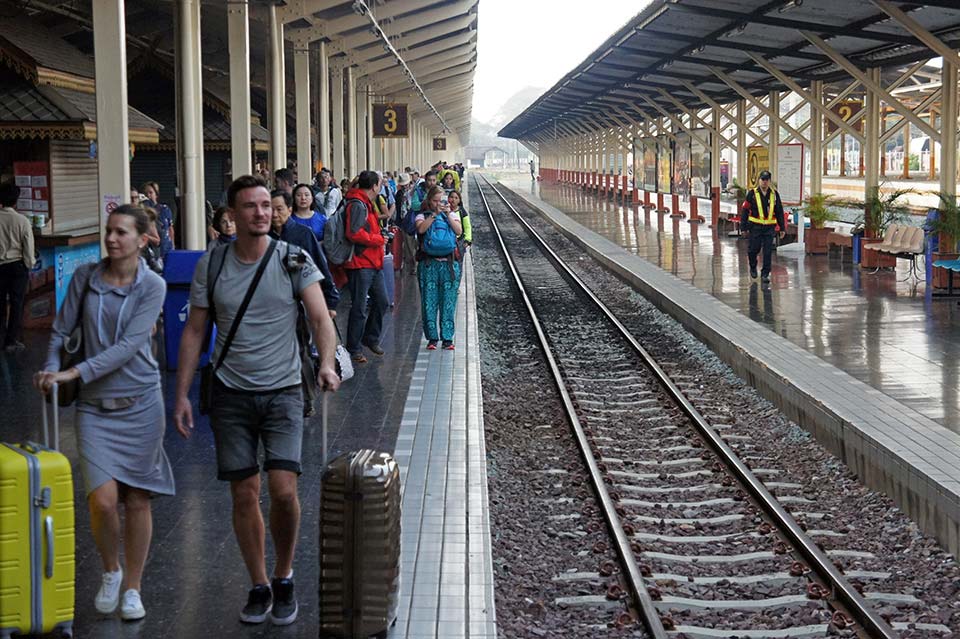 Many of the people who plan a trip to Thailand, at some point, wonder whether or not they should take the night train from Bangkok to Chiang Mai. In this article I am going to give more information about that journey to make you easier to decide whether it’s for you or not.

Bangkok Train Station: The past (Hua Lamphong) and the future (Bang Sue)

Bangkok’s train station, Hua Lamphong, is an iconic building in the city. It was inaugurated in 1916 after 6 years of construction and today, after a century, it is still in operation and has practically not changed since then. So going through there never hurts. You will get to know a train station from the beginning of the 20th century. More than 60 thousand people pass through it daily.

In the station you will find practically everything. Some of the services available are:

► Lockers to leave the suitcases. Prices here.
► Cyber ​​with internet.
► Cafeterias (without wifi).
► Mini-supermarket (it is recommended to bring some food).
► Hotels and hostels in the surroundings.

However, from November 2021 this changes. The historic Bangkok Railway Station, or Hua Lamphong, will cease its operation and trains will move to the new Bang Sue Grand Station. The largest train station in South East Asia.

Every day there are 5 trains from Bangkok to Chiang Mai. Four trains with beds and one with only seats. The journey is usually 12-13h although sometimes it is delayed.

The schedules are as follows:

What’s the best train from Bangkok to Chiang Mai?

What are the trains like? Which option to choose?

• 1st class: Private cabins with a / c. It is usually full because there are few.
• 2nd class with A / C: The option most travelers take.

The second class of the train at 6:15 p.m., consists of a carriage with a corridor in the middle and on both sides there are beds. Each sector has 4 beds, 2 upstairs and 2 downstairs. I recommend reserving the lower bed as it is much wider. When you get on the train, the beds are not yet ready and what you find are 8 seats that later, around 8:00 p.m., a train worker will convert into 4 beds.

The train also has a restaurant car but the food is expensive and bad, so it is recommended to bring food. Alcohol is completely forbidden. If the train police see you having a beer, they will ask you to throw it away or they might even fine you.

Photo Gallery of the Night Train that leaves at 18:10 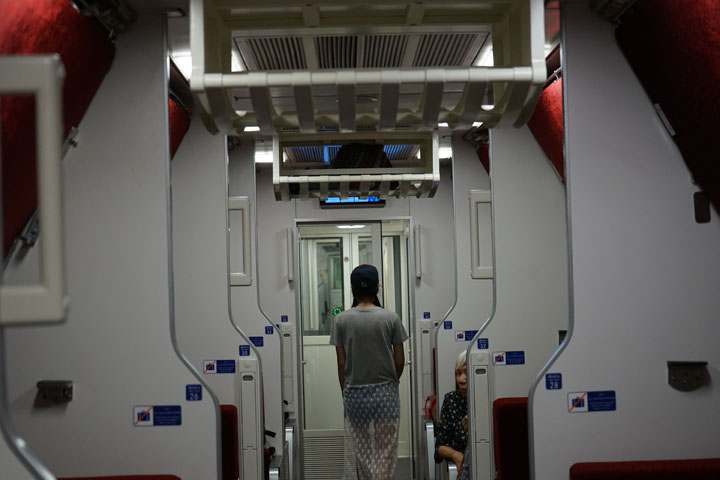 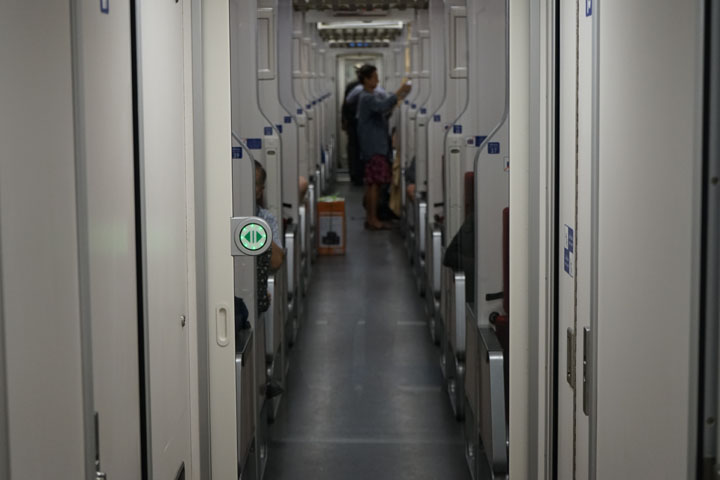 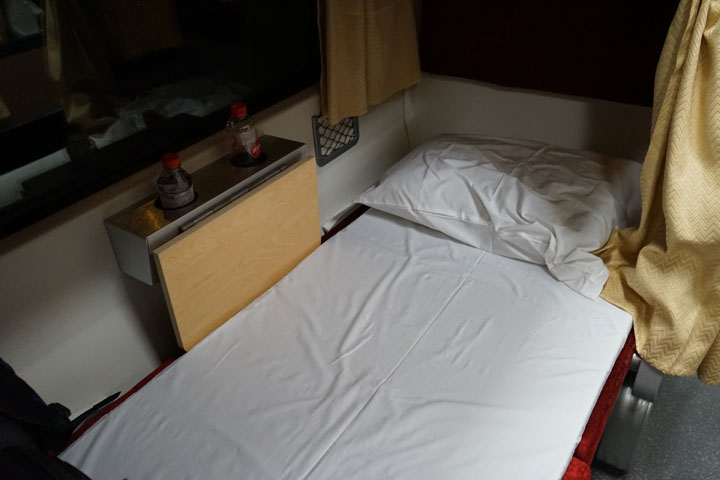 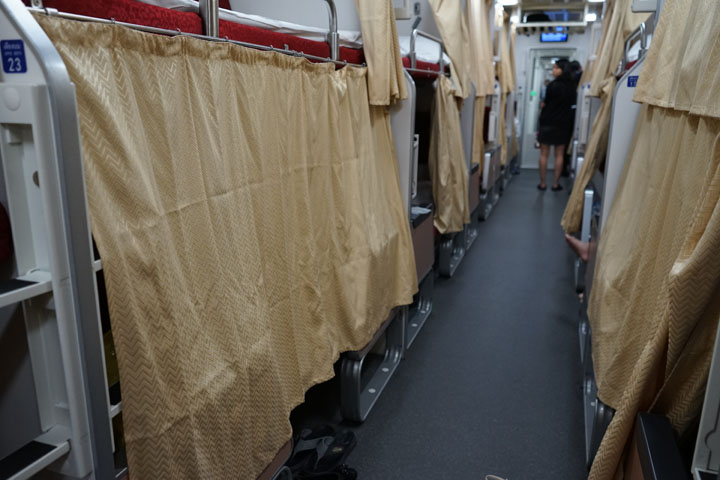 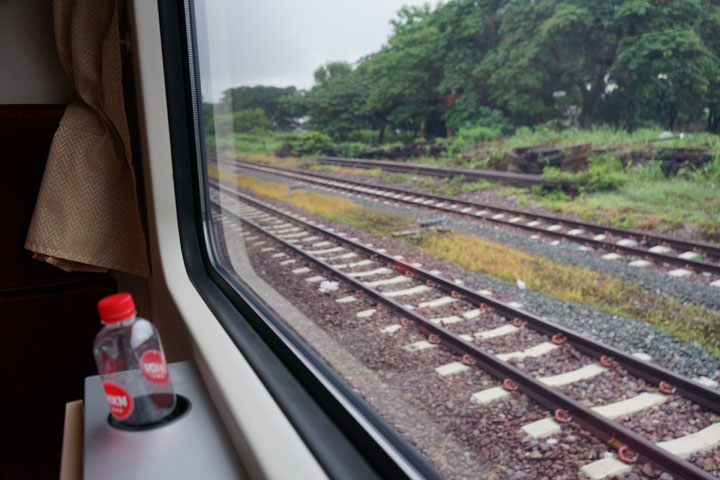 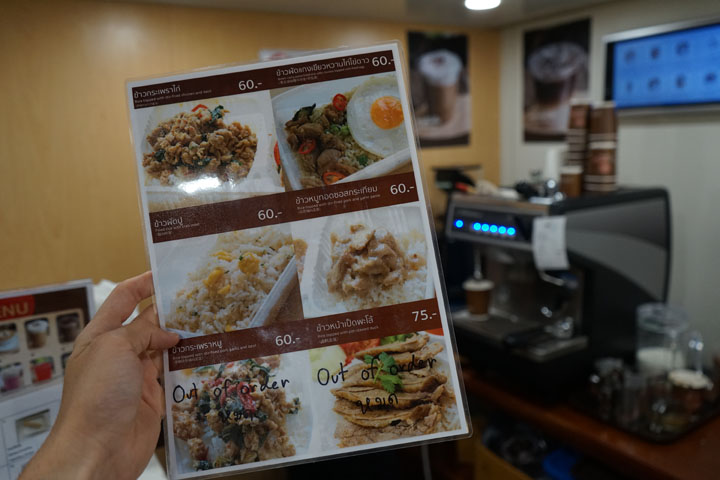 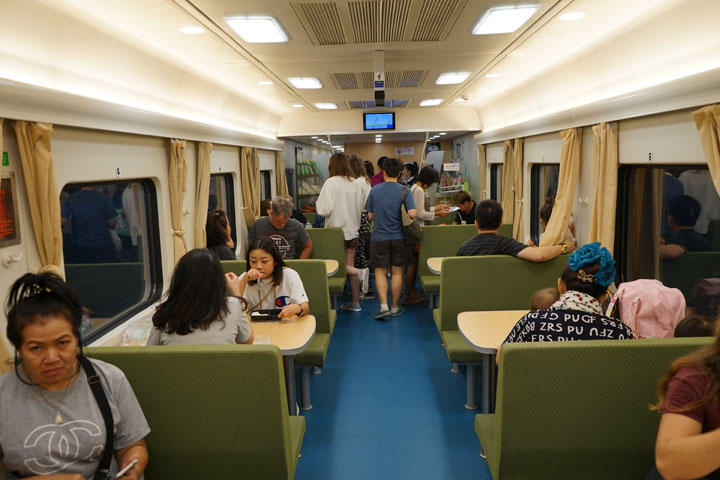 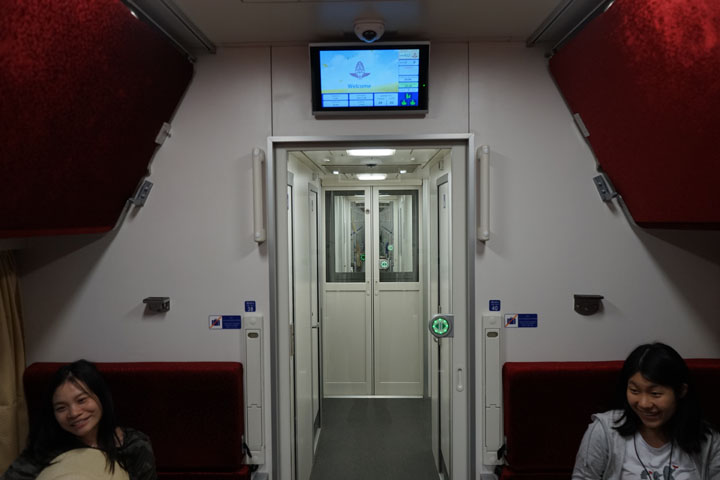 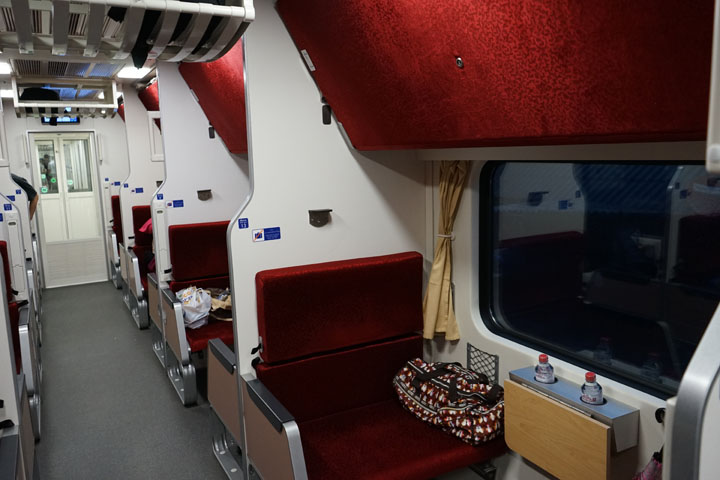 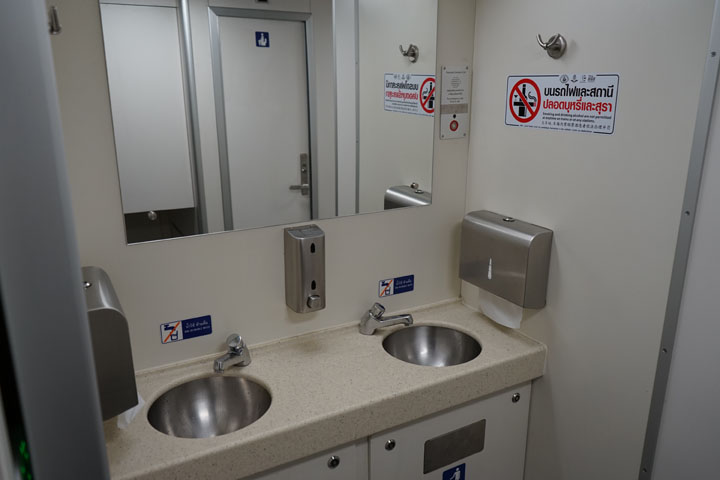 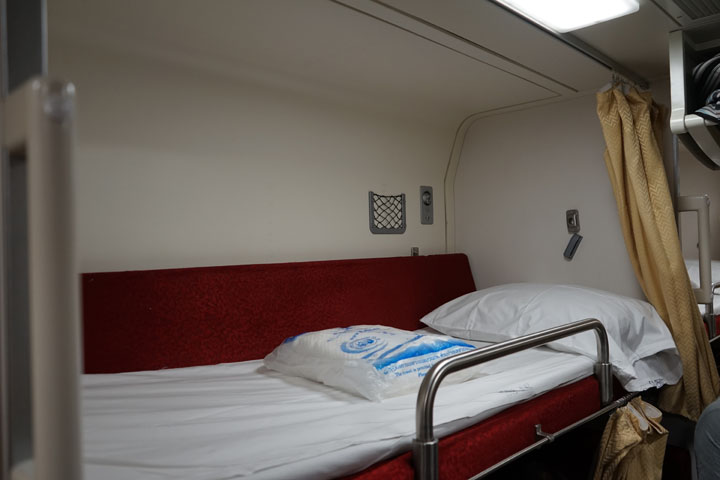 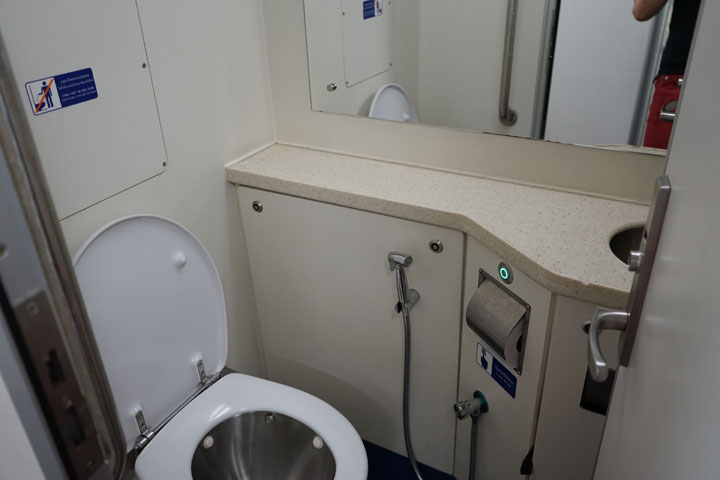 Do you sleep well in a night train?

The beds are comfortable and the sheets are clean but the train moves a lot, so if you are one of those who have trouble sleeping it may not suit you.

Personally, moving a little doesn’t bother me, it even helps me sleep. In general, I think that most people sleep quite well on the train, although at some point during the night you will wake up a little more from the movements and go back to sleep.

Whenever I have slept in a bed on a Thai train, I have arrived at the destination totally rested.

Should you take the Night Train from Bangkok to Chiang Mai?

You should take it for …

1) Budget: If you are on a budget, the train is a very good option since in addition to being cheaper than flights (half price), it saves you a hotel night and the trip to the station is cheaper than the ride to the airport.

2) Adventurer: If you have never taken a night train, it is a good opportunity to live the experience. Trains are usually between 20 and 30 years old. They are old but this also gives them a nostalgic and adventurous touch.

1) Bathrooms: The train toilets are not bad but don’t expect them to be shiny. They are clean enough for the couple of times you will use them. However, the movement of the train complicates things a little, not much. Before going to bed you can brush your teeth and wash your face but you will not have 100% privacy while you do it.

2) Time: Although with the train you save a hotel night, the truth is that if you go to Thailand for a few days, you will make better use of your time if you fly to Chiang Mai.

How to buy train tickets?

Ticket of the Night Train from Bangkok to Chiang Mai can be purchased from 60 days prior to departure, not before. You can buy them directly at the station. Recently there is also a special office for foreigners where they speak English.

The overnight commute from Bangkok to Chiang Mai is one of the most popular so it can get quite crowded. The best way to find a bed is to buy the ticket a few days in advance.

How to buy train tickets online:

How to get to the Bangkok train station?

It is very easy as the train station is connected to the Bangkok subway (MRT). You only have to get to the Hua Lamphong Metro Station (MRT). If you are staying in a hotel far from the metro or skytrain, I recommend you simply take a taxi. With a meter it will start at 35 THB and rarely exceed 100 THB.

Bang Sue has its own station subway station so you can just ride the MRT to Bang Sue Station.

Do you want to know more? 🚂 TRAINS IN THAILAND: Price comparison and Best place to Book the tickets

What about from Chiang Mai station to my hotel?

Upon arrival you will find many tuk tuk and taxi drivers waiting to take you to the hotel. They are an option. If you are on a very tight budget you can walk to Charoen Muang Rd, which is 5 minutes away, and from there take a songthaew (pick up car) to the old area. Songthaews cost only about 20 THB each way. You can also walk, there are about 3 kms to the old area, past the river.

What if I want to go by plane, what options do I have?

You can have a look at our article of Transportation in Thailand or Airlines in Thailand.