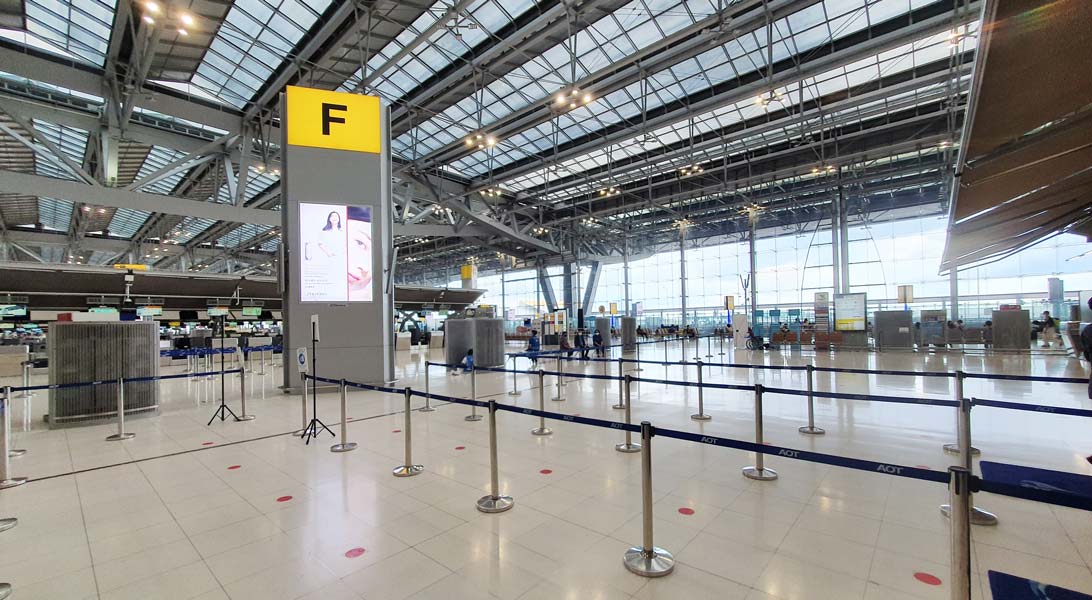 Wondering what airports in Thailand are like and how many are there? Thailand is probably the country in Southeast Asia with the most air connections, both domestic and international, with a lot of flights operated by high quality companies (even in the case of low cost options).

In addition, the high competition means that cheap flights to Thailand and around Thailand can be found easily. Here you have a list of Airlines in Thailand: full service and low cost ones.

In this post, we tell you which airports in Thailand may be the most convenient for your trip and what you need to know when choosing the flights that best suit your route.

Map of Airports in Thailand

Let’s start with the map of Airports in Thailand (blue: International ones; red: Domestic Ones):

Bangkok, the capital of Thailand, is the city that offers more domestic and international connections, but to avoid confusion it is essential that all travelers know that there are two big airports: Suvarnabhumi and Don Mueang.

Although both airports are connected by a free shuttle bus, whenever possible, avoid having to change airports in order to connect 2 flights. This 2 airports are far from each other (about 50 km) and apart from the inconvenience of the transfer, the frequent traffic jams in Bangkok make the travel time unpredictable (usually between 1 and 2 hours, who knows!?).

If you travel to Thailand from outside of Asia, the airport with the most connections is Suvarnabhumi Airport (BKK)

Suvarnabhumi Airport is gigantic and, with its more than 60 million passengers a year, it is the busiest airport in all of Southeast Asia. But don’t panic! It is a very well designed airport and easy to navigate through.

If doubting, you just have to go to one of their information desks and ask for help.

How to go from Suvarnabhumi to downtown Bangkok and vice versa

For independent travelers, the best options are taxi and Skytrain. The modern train called Airport Link, which is accessed directly from the B floor of the airport, for only 45 bahts, and it takes only 35 minutes to the central Phaya Thai station, which allows connection with the Sky Train urban transport.

Don Muang Airport is one of the oldest airports in Asia (it started operating in 1924). Despite being Thailand’s second airport in Bangkok, Don Muang is a huge airport with a lot of traffic (more than 40 million passengers a year), from which mainly low cost airlines and cheap flights to Thailand operate, both for domestic and international flights. The most prominent are Airasia, Nok Air and Thai Lion Air.

For solo travelers, the best option is a taxi. Although for those who have the time and patience, the cheapest option is to take the bus from the airport to Chatuchak Park, where you can connect with the metro (MRT, Chatuchak station) and the Sky Train (BTS, Mo Chit station).

Where to book your tickets for trains, buses, ferries or flights in Thailand?

➡️ The Best Website to Book Tickets Online in Thailand

Baolau is the best place to book your tickets since they have the best rates that you will find online. Their commissions are very low and offer many options for all itineraries, from flights to night trains, buses, private vans, ferries… you name it!

Chiang Mai airport has lots of domestic connections to all regions of Thailand and it also has an international terminal that connects with several regional destinations: Vietnam, Malaysia, Myanmar, Laos, South Korea, Singapore, Taiwan, Hong Kong and a lot of cities in China.

Although considerably less traveled than Chiang Mai Airport, Chiang Rai Airport (called “Mae Fah Luang”) is a good option for those who want to explore the far north of Thailand or enter Laos via the popular Chiang Khong / Houay border.

Most of the flights operated here connect with Bangkok, although there are also some domestic flights to places like Phuket, Hat Yai and Udon Thani, as well as to some Chinese cities.

In addition, you will be interested to know that Krabi and Phuket are the most popular destinations to visit the beautiful islands of the Andaman Sea.

With almost 20 million passengers a year, Phuket is the third busiest airport in southern Thailand and offers many air connections, both domestic and international with Asian and European countries.

Koh Samui Airport is mainly connected to Bangkok and Chiang Mai. However it also has some flights to Krabi, Phuket and international connections to China, Hong Kong, and Singapore.

As a disadvantage, Koh Samui flights are operated by a single company, Bangkok Airways, and that makes prices higher than what one expects.

Hat Yai airport is the southernmost airport in Thailand, it is almost next to the Malaysian border. It is the most convenient for those who want to visit the islands of the extreme south such as Koh Lipe and Koh Tarutao Park.

The main Thai cities connected by air to Hat Yai are Bangkok, Chiang Mai and Phuket.

Another major airport in southern Thailand is Surat Thani Airport. It is interesting mainly for those who want to visit the southern islands of the Gulf of Thailand (Koh Samui, Koh Phangan and Koh Tao) but don’t want to use the more expensive (and faster) alternative of flying to Koh Samui with Bangkok Airways.

Ferries that connect with the islands leave from the Surat Thani pier and a good option to consider are the packages offered by the low cost Air Asia and Nok Air, which include flight + transfer to the pier + ferry to the islands (using the Surat Thani or Chumphon airports).

Isan, the East of Thailand, is by far the region that receives the fewest tourists (despite having highly recommended destinations).

For those who dare to explore this region, the most convenient airports are, firstly, Udon Thani (IATA code: UTH), in the extreme northeast of Thailand and close to the capital of Laos, Vientiane.

Secondly, Ubon Ratchathani (IATA code: UBP), in the eastern tip of Thailand and convenient for crossing the border in the southern part of Laos.