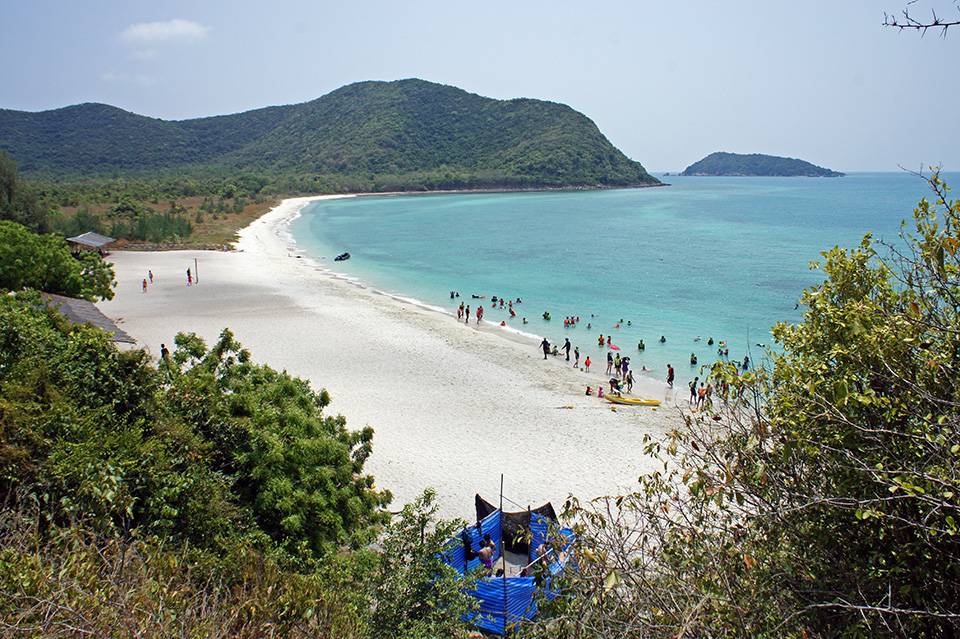 By Pol Comaposada30 March 2021No Comments

Really beautiful, little-known, protected and access-restricted. These are the main characteristics of small Samae San island, located southeast of Bangkok, not far from the city of Pattaya.

Samae San island is so little-known that many Thais don’t even know it exists. If you search for it on the internet, you will find little information in English, although of course there are good articles in Thai. The Sunday that my father and I decided to visit the island, we were the only foreigners there.

Samae San is protected by the Royal Thai Navy, which manages the island and uses it as land for military exercises, without apparently affecting its ecosystem. The island is also under a royal conservation plan that aims to protect the local flora and fauna. The island is completely undeveloped, and there is no construction other than a small military building.

Access is restricted to a maximum of 500 people per day, although I seriously doubt that on weekdays they receive more than a dozen visitors. Also, we were told that foreigners are not allowed unless accompanied by a Thai. I suppose, and I hope, that if they find some unaccompanied foreigners who have already made the effort to get to the pier, they might be flexible and let them visit the island… But that’s just my guess. The reason they gave us for this requirement is that they want to avoid communication problems between non-Thai speakers and the military who run the island. All staff who will welcome you, rent the snorkeling equipment and take you to see corals are friendly young soldiers.

Once you arrive on the island, a soldier will give you a short speech to explain what activities can be done. They have organized a few different activities for the enjoyment of visitors, such as snorkeling -the most popular option-, taking a bicycle to explore the island or doing a little trekking. We chose snorkeling. First they equipped us with goggles and snorkel, then they took us to a nearby beach -the best on the island-, and there we jumped in a boat that took us to a beautiful coral area.

My expectations were high, but both the beach and the seabed were even better than I expected. The beach is long, with white sand and crystal clear water. The only building there is a small snack bar, so the beach looks practically virgin. All Thais, both men and women, bathed in T-shirts and shorts, but there was not a single girl in a bikini. They told us that it was forbidden … and that’s not surprising considering the island is run by the military. Despite the undeniable fact that Thailand is also known for sex tourism, many Thais like to see themselves as a conservative society, and the military traditionally works to protect this image. So no bikinis on Samae San island!

The coral area they took us to was very well preserved, and there was a huge variety of colorful sealife. Much more than what is usually found in the most touristy Thai beach destinations.

It is possible to buy drinks and snacks on the island, and even some food, but the options are scarce. I would recommend not to visit Samae San on an empty stomach, and if you plan to have a full meal there, better bring your own food. Of course there are no ATMs.

How to get to Samae San Island

Getting to the island is not a straightforward affair. It can only be reached by the army boats that depart from the jetty by the army quarters, in Sattahip. This is the exact location. There are 6 daily boat departures to Samae San, hourly from 9 a.m. to 2 p.m.

It is not possible to buy or book tickets in advance. In order to buy the ticket you must go to the reception building of the Natural History Museum (see picture below), next to Khao Mar Jor pier, get a queue number and wait your turn. The queue number can be collected from 7 am onwards.

From 8 am they start calling the numbers so that people go to the counter, pay the fare and collect their boat tickets. For the round trip, Thais pay 300 THB and foreigners 600 THB.

In short, getting to Samae San is quite complicated. So complicated that I wouldn’t recommend it for a first trip to Thailand. In this case, it might be better to choose other beach destinations as Krabi. But if you have already traveled a lot in Thailand, or if you live in Bangkok, then yes, Samae San can be a great day trip.

🚍 How to get to the Sattahip jetty

Khao Mar Jor pier, the Sattaahip jetty from which boats depart to Samae San, is located 16 km souteast of Sattahip town, which in turn is 34 km south of Pattaya. What makes more sense is to stay in Sattahip for at least one night, and wake up early next day to visit Samae San island. But if you are in a hurry, it is also possible to visit Samae San as a day trip from Bangkok (180 km), especially if you drive your own car.

Sattahip has plenty of resorts and hotels, as it is a common weekend destination for domestic tourism.

To get from Bangkok to Sattahip you can take a Rayong bound bus/van from Ekkamai Bus Terminal, get off at Sattahip Market, and there take a public songthaew (two-row-bench pickup) to Khao Mar Jor pier. Of course it will be much easier if you drive your own vehicle.

Finally, we want to thank Aii (Kullanit Wiwattanawarang) from ‘InThailand’ office for discovering to us this little secret island 😉 ขอบคุณ ครับ!