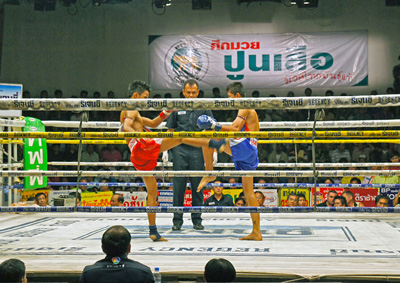 By Pol Comaposada26 January 2022No Comments

Many years ago, when I had already been living in Bangkok for over a year and a half, one Sunday afternoon I decided to go watch live Muay Thai. Although it took me that long, watching Muay Thai in Bangkok is a popular activity among travelers on their first trip to Thailand. For those who don’t know much about Muay Thai, here is a short explanation.

A little about Muay Thai

Muay Thai is a traditional Thai combat sport in which practically everything goes to defeat the opponent. Almost any part of the body can be hit or used to hit. Fists, elbows, knees and legs can be used to hit, but not the head. Biting or fighting on the ground is prohibited.

Matches usually last half an hour and are divided into several short rounds of only a few minutes. Normally the fights end in a winner by jury’s points, although it is also very common for one of the fighters to finish KO.

While it cannot be denied that it is a violent sport, it is also true that Muay Thai has its spiritual side and ethics, and experts in the field affirm that Western boxing is more dangerous than Muay Thai, since in the latter the head is attacked much less, and the blows are more evenly distributed throughout the whole body.

Muay Thai is considered the national sport of Thailand, alongside takraw (that kind of southeast Asian volleyball played with feet), and it only comes second to soccer in popularity. I have the feeling that Muay Thai is more followed by middle-aged men than young people, who seem to be more interested in soccer. However, Muay Thai is widely accepted, and it is rare to find Thais who dismiss it for being an excessively violent sport.

In any case, attending a live Muay Thai match is undoubtedly an interesting experience even beyond the fights themselves. To see the intense atmosphere in the stadiums -largely motivated by betting, of course!-, the rituals prior to each fight, and the traditional live music that plays during the matches… You may suspect that they forgot to tune the instruments, since it just sounds like hell! Each fight consists of 5 rounds of 3 minutes, so in one session you can see up to a dozen fights, or just leave when you’ve had enough.

Every Sunday a Thai TV channel broadcasts Muay Thai matches. I went to see them and recorded the following 1 minute video. You will notice that most men in the audience scream like crazy, and it is not only because they are loyal supporters: betting upon muay thai matches is extremely common, so while the wrestlers fight in the ring, money bills run with as much vigour among the audience.

Where to watch Muay Thai for free in Bangkok?

🥊 Every Sunday at Channel 7 Studios in Bangkok there are about 4 or 5 bouts of Muay Thai. The fights begin at 2:30 p.m., although sometimes the schedule varies a bit according to live broadcasting tv schedule. In any case, it is advisable to go well in advance to secure admission. Watching the show standing up is free, or you can get a ring-side seat for THB 300. To get to the studios, you must go to Mo Chit Skytrain station, and then walk 10-15 minutes or take a motorcycle taxi (bikers with an orange bib). Tell the driver that you want to go to Channel 7 to watch Muay Thai. In case of verbal communication problems, just make a boxing gesture and he will understand. The short ride should cost 10 or 20 THB.

🥊 Also, every Wednesday in front of the MBK Shopping Center, they put on a free Muay Thai show for tourists. Although the fighters are not as good as those at Channel 7 Studios, it is a very convenient option for those who are curious about Muay Thai but not interested enough to go to a Stadium, as besides being free it is very centrally located.

Where to watch Muay Thai in a stadium?

🥊 Lumphini Stadium: It is probably the most famous Muay Thai stadium in the world. It used to be next to the central Lumphini Park -hence its name-, but in 2014 it moved to its current location near Don Muang Airport. The best way to get there is by taxi. There are seats in three price categories: 2,000 THB -about € 50- for 1st class by the ring, 1,500 THB for 2nd class, and 1,000 THB for 3rd. It is also possible to watch the matches standing up in the farthest area, for only 400 THB… and with a great local atmosphere! Matches are on Tuesdays and Fridays from 6:30 p.m. to 11:00 p.m., and on Saturdays from 4:00 p.m. to 8:00 p.m. and from 8:15 p.m. to midnight. This is one of the best two options for watching Muay Thai in Bangkok. Website.

🥊 Rachadamnoen Stadium: Older than Lumphini, it is the other great Muay Thai stadium in Bangkok -and in Thailand and the whole world!-. There are matches on Mondays, Wednesdays, Thursdays and Sundays starting at 6pm, and prices are the same as at Lumphini Stadium, although there is no standing up option. The Rachadamnoen stadium is in a fairly central location but without good connection to public transport, so the best option is also to go by taxi. Together with Lumphini, the best Stadium to watch Muay Thai in Bangkok. Website.

🥊 In other parts of Thailand, for example in Chiang Mai or on several islands, it is also easy to find matches with more affordable prices than in the aforementioned stadiums.

A Muay Thai evening in 16 pictures