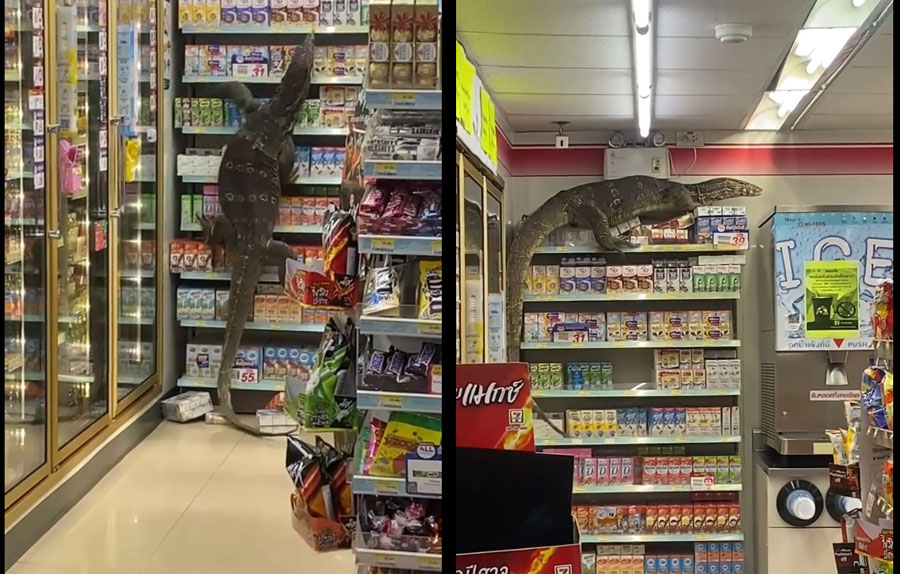 By Josue Josue8 April 2021No Comments

Facebook user Jejene Narumpa shared a video of a huge and apparently confused Lizard climbing up shelves in a 7 Eleven while creating a chaos in the little 24 hours store.

It is not clear how the confused animal got inside the store but this kind of Asian water monitors are very common all around Thailand, especially in Bangkok, so it is not totally rare for them to get in weird places.

Asian water monitors can be easily spotted in places like Lumphini Park in Bangkok. In addition, if you take a boat around the canals of Bangkok City, you will probably see them swimming or taking a sunbath somewhere.

This reptiles are excellent swimmers and do not seem to mind dirty waters since they live in some of the dirtiest Bangkok canals. They are carnivores and hunt small animals and fishes, although will often eat carrion.

The name of this lizards in Thai language is one of the worst insults you can say. Some people even thinks that they bring bad luck. In Thai popular culture this animals are not very different from streets rats.

It is not the first time a video of a lizard in a weird situation has gone viral on internet, there are many of them online. For example:

📹 One already tried to get in to a 7 Eleven in the past, unsuccessfully:

It’s not the first time a Lizard attempted to get into a 7 Eleven, in the next video you can see another one trying hard:

📹 Another one got famous while ‘trying to use’ an ATM:

Thai Lizards have been recorded doing lots of things, this one was trying to use an ATM:

📹 A third one got into the ceiling of a hospital:

Lizards are famous in Thailand to get into very weird places, like this little one that was inside the ceiling of a hospital. It was not easy to remove it:

Test and Go Package: Get your Thailand Pass Now

Culture and ReligionNews of Thailand

Gays in Thailand: Is it a LGBT friendly country for tourism?