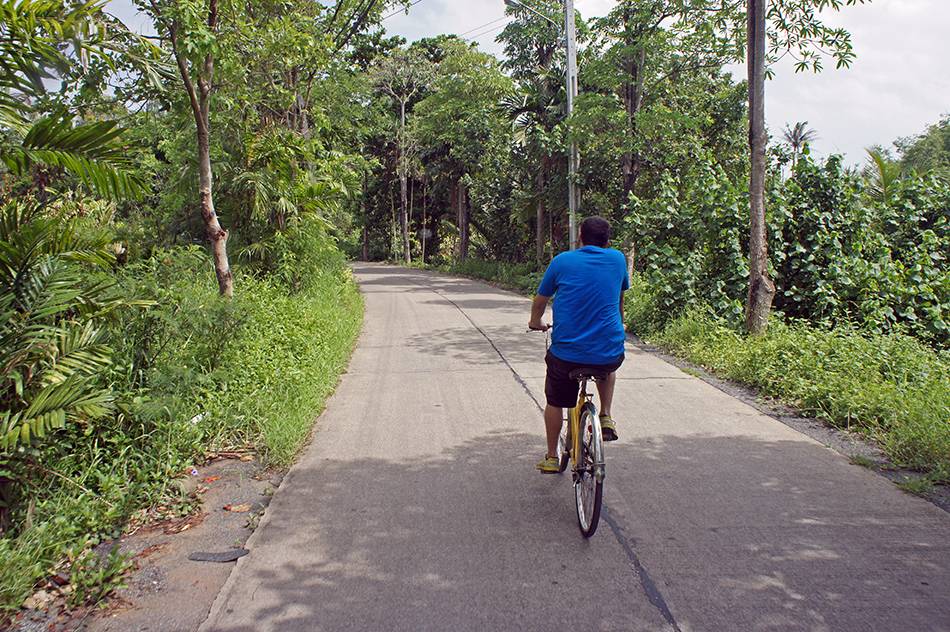 Green lungs of Bangkok? That sounds strange, almost unbelievable, for most people that has been only a few days in Bangkok. The capital of Thailand doesn’t seem to have a lot of green areas. Actually it doesn’t but it does have this 2 huge areas that many people consider its green lungs.

If you want to go out for two or three days, you have several good destinations: Hua Hin, Kanchanaburi, Khao Yai or even the islands of Koh larn or Koh Samed. But if you want to escape the chaos of Bangkok for just a few hours, where can you go? I used to wonder often when I had been based in Bangkok for only a short time, until one day, browsing on Google Maps, I noticed a couple of huge green areas in the middle of the city. Especially the first one, Bang Krachao, which is located in the south of the city. The second, Koh Kred, is a bit further, to the north. Those 2 are considered the Green Lungs of Bangkok.

The main of the green lungs of Bangkok: Bang Krachao

When looking at Bang Krachao from Google Maps, it seems almost suspicious that such a green area is in the heart of Bangkok and hardly anyone talks about it. Most Bangkokians, whether Thais or foreigners, have never set foot there, or are not even aware of its existance. Just over 6 km from one of the most important commercial areas of the city, Sala Daeng and Sathorn, this green island remains protected from urban development by Thai laws.

At Bang Krachao you will find a well paved main road, connected to many other smaller roads with practically no traffic. All these small roads are surrounded by lush green tropical vegetation, and the best way to explore them is by renting a bicycle (100 THB all day) from the jetty you’ll see right after you arrive in the boat. Yes, Bang Krachao is reached by a small boat that crosses the Chao Phraya River. While sailing towards Bang Krachao, you’ll have views over Bangkok’s commercial port and, further away, some of the city’s impressive skyscrapers.

🌿 • Si Nakhon Khuean Khan Botanical Park: A very cool park where you can walk and relax for a few hours, or just explore by cycling.
🛍️ • Talad Bang Nam Peung – Weekend Floating Market: A market where you will find many food stalls, and some others selling clothes and souvenirs. Don’t expect many canals with boats, although there are a few. Only active on weekends!

🏩 In Bang Krachao there is a pretty cool small hotel called Bangkok Tree House. It is not cheap, but it is very special since its rooms are on top of trees.

How to get to Bang Krachao?

The best way to reach Bang Krachao is by taking the MRT (subway) until Kloeng Toei stop, and then a taxi, mototaxi or tuk tuk (50-100 THB) to nearby Kloeng Toei pier (all drivers know the place, since it is very close). This pier is next to Klong Toey Nok Temple and to the Export Customs Office of Bangkok’s Commercial Port.

From there you must take a boat (5-20 THB) to Bang Krachao. When you arrive at the Bang Krachao jetty, you will see a bicycle rental shop (100 THB/day or 50 THB/hour). An amazing fact: they don’t even give you a padlock, because it is a thief-free area… And yet you’re still inside Bangkok!

Second Green lung of Bangkok: Koh Kred, an island in the middle of Chao Phraya River

Koh Kred is another hidden gem in Bangkok, ideal for escaping the traffic and concrete jungle that the capital of Thailand has become. It is an island in the middle of the Chao Phraya River, artificially created in 1722 when a shortcut channel was dug to skip a meander in the river. The resulting island is Koh Kred. The island served as a refuge for the Mon, one of Thailand’s ethnic groups, who have lived there for decades working mainly in pottery. If you go there you will have the opportunity to visit one of their small workshops, where they make pots, figurines and other ceramic artifacts.

On weekends Koh Kred is flooded with hundreds of Thais who take the opportunity to get to know the island and enjoy its market, while during the week there is practically no one other than its inhabitants. In Koh Kred I also recommend you to rent a bicycle and ride along the only road there, which surrounds the island. It you prefer to walk, it will take only a couple of hours on foot.

How to get to Koh Kred?

When I went to Koh Kred for the last time I took a public boat (15 THB) at Saphan Taksin pier (which links to BTS Saphan Taksin Skytrain), and sailed upriver until Nonthaburi pier ( N30). Once there I found a van that took me to the jetty, where I took another boat to Koh Kred. In case I didn’t find the van, another option would have been taxi (100 THB).

Bus 166, which has a stop at Victory Monument roundabout (next to Skytrain BTS Victory Monument station), also goes to Pak Kred Market. Once there you have to walk about 500 meters to the jetty, and take the boat to Koh Kred island.

An even easier option is to take the BTS Skytrain (elevated train) to Mo Chit or the MRT (subway) to Chatuchak, and once there take a taxi to the jetty.

🏩 A couple kms north from Koh Kred island, there is a hotel that seems very quiet, Buddy Oriental Riverside, which looks like a good option if you want to spend a night in a quiet place without leaving the city.