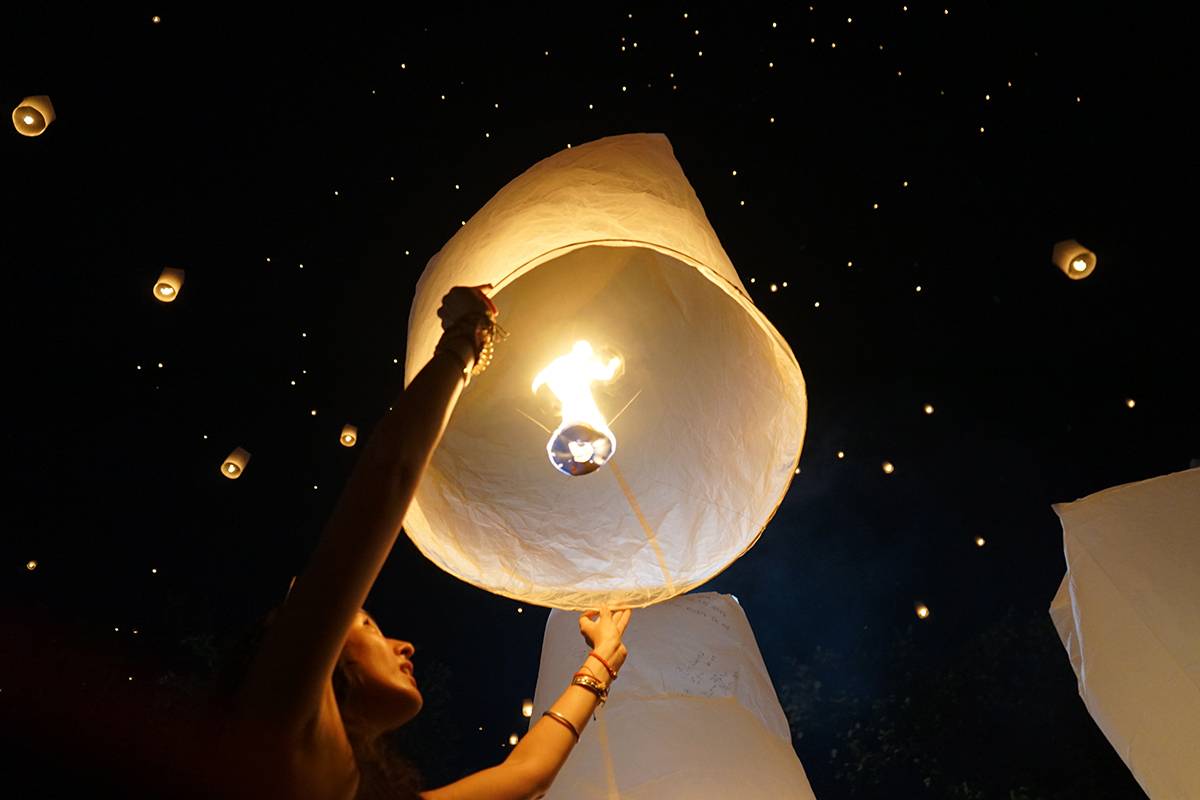 By Pol Comaposada4 June 2021No Comments

Yee Peng is one of the most anticipated festivals in Thailand along with Songkran, the Thai New Year. These are the two favorite annual festivals of Thais, and the images of these celebrations can easily blow foreign minds too.

Yee Peng festival is a truly magical and incomparable celebration. For two nights, the sky over Chiang Mai is flooded with thousands of flying lanterns. They are small and very simple hot air balloons made of rice paper, which get lit up with a fuel pellet that makes them rise hundreds of meters in the sky, until they look like small moving stars when viewed from the ground. The show in the sky is truly impressive, and it is the work of the very same people who come to enjoy it. The spectators are the same people who put on the show, and it only depends on them that there are more or less flying lanterns in the sky. Adding up foreign tourists, Thai tourists and local people, the number of flying lanterns ends in the thousands.

The famous Yee Peng festival in Chiang Mai is actually a northern variation of another event held on the same dates all across the country: Loy Krathong.

Loy Krathong is celebrated each year on the twelfth full moon of the year, following the traditional Thai calendar. That is usually in November.

During Loy Krathong festival, Thais go to rivers and lakes to release their floating krathong on the water. Krathongs are small floating boats made of banana leaves with a lit candle in the center. The reason for this tradition is to pay homage to the spirits that inhabit the waters, according to the local tradition, whose origins come from India although they are not entirely clear. It is known for certain that Loy Krathong was already celebrated in the days of the Sukhothai Kingdom. That is why Sukhothai is one of the places where Loy Krathong celebration is bigger still nowadays.

That is why, while Loy Krathong is celebrated throughout the country, in Chiang Mai two festivals are mixed: Loy Krathong and Yee Peng. The main acts of this festival last 3 days. It is during the second and third day when people release floating krathongs in the water (typical of Loy Krathong) and also fly their flying lanterns (typical of Yee Peng). This, which is practically only done in Chiang Mai and to a lesser extent in other northern cities, is done because it is believed that flying lanterns ward off bad luck.

As every year, from our office in Bangkok we organize a special Yee Peng route that begins in Bangkok and ends in Chiang Mai, coinciding with the Yee Peng festival dates. We make little adjustments year by year, but basically it is as follows:

This route can be extended with a few days at a beach destination at the end. If you want to know more, you can write to us mentioning that you are interested in the Yee Peng trip.

1) Is this festival held only in Chiang Mai?

Yes, Yee Peng is celebrated only in Chiang Mai city, although it may be that other northern cities like Chiang Rai also fly a few lanterns on those same dates, but to a much lesser extent. As we explained earlier, during the same dates all of Thailand (including Chiang Mai) celebrates another festival: Loy Krathong.

2) When is the Yee Peng celebrated?

As I said, normally Yee Peng festival is celebrated on the same dates as Loy Kratong, and that is during the full moon of the 12th month of the Thai traditional calendar, usually in November. So the date on the Gregorian calendar changes every year. Yee Peng and Loy Krathong in Chiang Mai last 3 days, although it is during the second and third days that the flying lanterns are launched.

3) Do I have to pay to enjoy Yee Peng? Where are the flying lanterns released?

You don’t have to pay: Yee Peng festival is free. During the two nights the flying lanterns are released, most people go to Chiang Mai’s Ping River as it is an open space where lanterns are easier to fly. On all bridges in Chiang Mai, and especially the central Nawarat Bridge, hundreds of people gather to launch flying lanterns, mainly around 7:00 p.m.

4) Where can I get the flying lanterns?

During the festival hundreds of stalls are set up in the streets, selling both flying lanterns and floating krathongs. They are usually very cheap, and come in different sizes.

5) Why do some places ask for an entrance fee?

There are places in Chiang Mai that take advantage of Yee Peng’s fame to do business. One of the most famous private lantern parties is the one held at the Mae Jo Universitiy campus, which usually costs about 4000 THB per person. In these private parties they coordinate the simultaneous launch of all the flying lanterns, which achieves the most spectacular photographs. Most of the social media photos that show hundreds of lanterns flying at the same time are taken at these private lantern parties. In the river area people do not coordinate, and just release the lanterns when they feel like it, so the final photo may not be so pretty. However, in the river area is where more lanterns end up decorating the sky, and where the real thing happens.

6) Where do these lanterns end when they fall?

Obviously, when the fuel pellet is extinguished, the lantern lights off and begins to fall. Where they fall depends on how far they flew and how windy that night is, but most don’t get further than the city of Chiang Mai. On the very night of Yee Peng, you’ll see them fall, sometimes intact, and remain abandoned in the streets, rooftops and treetops.

7) What problems do this celebration entail?

For security reasons, Chiang Mai airport closes for a few hours each year around the times when the lanterns are released. Other than this, it is not uncommon for  a house or tree to go up in flames. Thus, the festival also has its critics in Thailand. Cleaning services collect most of the lanterns the next day, although some fall into the river and are washed away, or fall into other unaccessible areas. However, since they are basically made of rice paper, they quickly disintegrate. In addition to the rice paper, they have a thin sheet of wood and a little metal wire to support the structure. The combustion tablet usually disappears completely when consumed.

So Yee Peng celebration certainly litters the streets of Chiang Mai, but not necessarily more than any other popular celebrations around the world.

Finally, if you are looking for an organized trip to enjoy Yee Peng and Loy Krathong celebrations, as well as discover some of the best destinations in Thailand, you can get in touch with us at InThailand Travel and ask for more info.