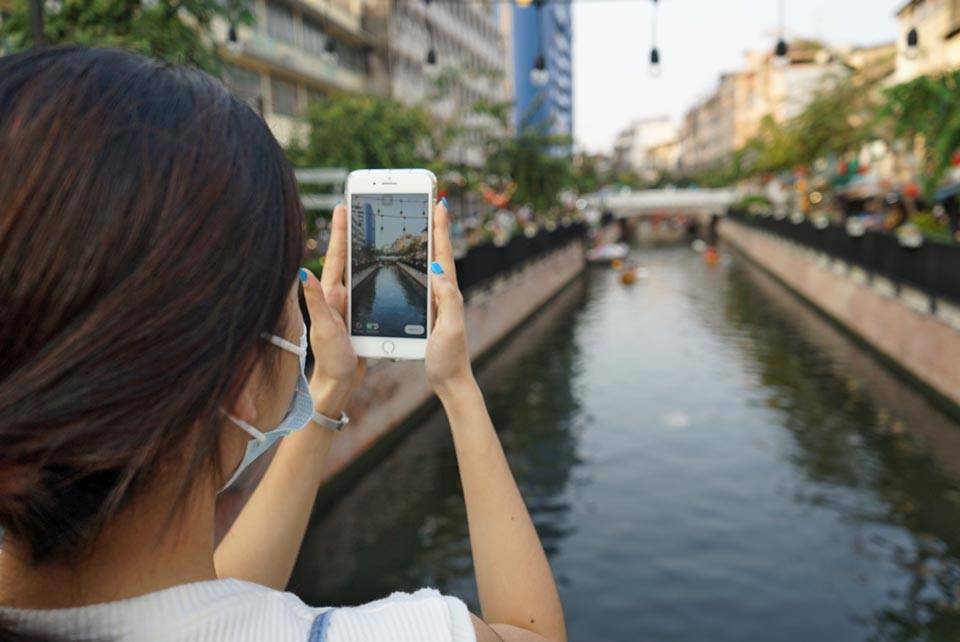 By Pol Comaposada8 May 2021No Comments

Today we’ll tell you about one very welcome new addition to Bangkok’s weekends nightlife: the beautiful Khlong Ong Ang canal market. Bangkok was once known as the Venice of the East thanks to its huge canal system. Starting from Bangkok’s Chao Phraya River, dozens of canals stretched out through practically every neighborhood in the city. Back then boats were the best method of transportation, and people literally lived and traded on water. Development and land motor vehicles gradually made boats a thing of the past, and the canals, little by little, began to disappear as streets where built above them. Those that survived, such as Khlong Ong Ang canal, became contaminated and ended up being practically open-air sewers.

Khlong Ong Ang Canal is located between Chinatown and Phahurat neighborhoods, the Chinese and Indian Quarters of Bangkok, respectively. It was created in 1783 and its name means ‘pottery canal’ (khlong means canal in Thai language, and ong ang means pottery), since this channel was an important pottery trading spot.

Over the years, it degraded until it became a highly polluted channel that didn’t attract any visitors. Recently, the Thai government finally decided to start cleaning Bangkok’s canals, and Khlong Ong Ang underwent an incredible transformation.

The canal has been modernized and transformed, and nowadays it is a very pleasant pedestrian street to walk along. On weekends, starting on Fridays, the canal is transformed into a large market for all kinds of products and food, where many Bangkokians come to have a good time.

The canal by day and night

Every Friday, Saturday and Sunday from 4:00 p.m., the channel offers a spectacular atmosphere of people, artists, shops and food stalls that we recommend you discover.

The walls, and some of the canal’s alleys, have been decorated with street art murals by local artists. The neighbors, following the typical Thai entrepreneurial character, set up tables and chairs on the street to sell their products or prepare delicious Thai dishes, desserts and all kinds of drinks. In Thailand they know how to set up a market in the blink of an eye!

You will see that, being close to the Indian quarter, there is a wide offer of Indian food, and even a Bhutanese restaurant. The canal is, therefore, an excellent option for a nice walk and a good and cheap dinner.

In various areas of the canal, there are also street musicians and even entire bands with dancers who brighten up the show.

In addition, there is a kayaking rental service and sometimes even SUP (Stand Up Paddle Boarding), which you can rent to paddle along the canal. Have a good look at the water before deciding whether to kayak or not, as some days we have also seen the canal waters quite dark and murky, and we wouldn’t have gotten there with a kayak.

My personal opinion about the canal

The new market on the Bangkok canal, Khlong Ong Ang, has already become one of my favorites, and this year I have already been there on numerous occasions. It seems to me that today it is one of the best, if not the best, weekend night market in all of Bangkok.

For now it keeps being a local affair, and the stalls mainly sell products for local people. Once international tourism, especially Chinese, discovers this market, it is possible that the products and food on offer will change a lot, adapting to the taste of tourists. Be that as it may, if the local government is encouraged to replicate this model in other channels in the city, they will surely also be a success.

Mega Plaza: the most Japanese mall in Bangkok

By the way, if you visit this canal you will see that right next to it, on a corner, there is a large shopping mall called Mega Plaza. It is the geekiest center in Bangkok, where you will find a wide range of video consoles and video games in Japan’s pure Akihabara style. Many of them are second hand. In addition, there is also a huge supply of other toys.

If you like this type of place, we recommend you visit before 4:00 p.m. and thus also enjoy this interesting geek shopping center in Bangkok.

How to get to Khlong Ong Ang canal market in Bangkok?

Test and Go Package: Get your Thailand Pass Now